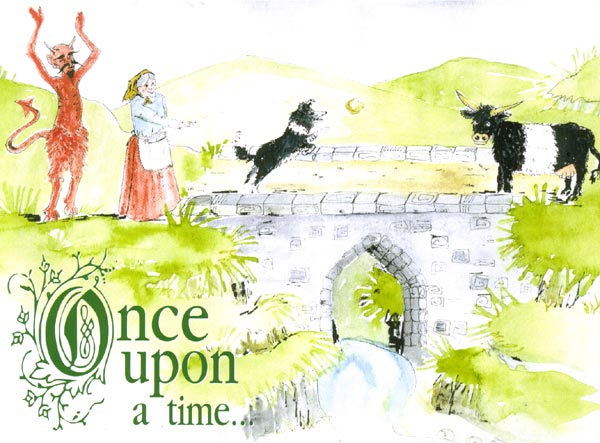 … around the IIth Century, the Devil visited Wales as he had never been there before and he had heard that the scenery was breathtaking. He soon came across an old lady who seemed upset. “What’s the matter?” he asked out of curiosity.
“Oh, I’m in such a terrible muddle and I don’t know what to do!. My cow has wandered across the river and I can’t get her back”.
‘Ah!” said the Devil ‘What you need my dear, is a bridge, and I am just the man to build you one. Why don’t you go home, and in the morning there will be a bridge waiting for you. All I ask in return is to keep the first living thing to cross the bridge!”
“Okay then” she said “It’s a bargain. I’ll see you in the morning. Nos da, Goodnight”

That night she wondered about this stranger who would build her a bridge. ‘What a strange request! Why should I cross the bridge to get my cow back if he gets to keep me in exchange? Mind you it is very tempting offer”

The next day she got up and called for her faithful dog. Together they went down to the river. “Well well” she couldn’t believe her eyes. In front of her was the best bridge that she had ever seen! I told you that I would build you a bridge” said the Devil appearing from nowhere.
“Now it’s your turn to keep your side of the bargain”.
I know, you get to keep the first living thing to cross the bridge” and she started to walk towards the bridge. But just when she got to the entrance, she stopped, took out a loaf of bread from her apron pocket and hurled it across the bridge. As quick as a flash and before the Devil could stop it, the dog chased after it. ‘Aaaaaaagh!!!!!” screeched the Devil. “You stupid old woman, I don’t believe it! Your smelly, hairy farm dog has become the first living thing to cross my bridge. It’s no good to me” he screamed and then he vanished.

Well, the Devil was never seen in Wales again as he was so embarrassed at being outwitted by the old lady. High in the mountains near Aberystwyth, there is a village where a very old bridge crosses a deep gorge. Above it are two other bridges built at later dates. But the lowest one….Well, they say that the Devil himself built it!

If you would like to hear an audio version of the story, click the play links below: